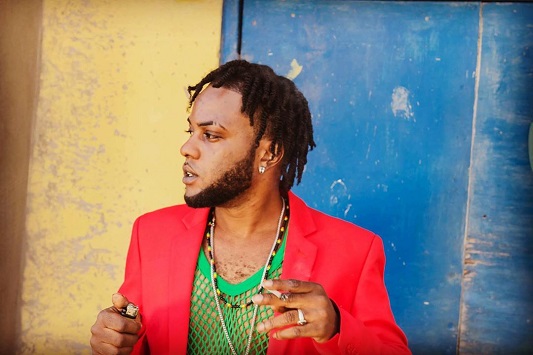 Standard on the lips of up and coming dancehall/reggae acts is the lack of support they get in and from the establishment and players in the entertainment industry. Many complain about being snubbed by producers for already established artistes, not getting support from the media/radio stations, having to pay for everything they need etc. Others emphasize that corporate brands and the government aren’t willing to help them get the big break but are always at the ready to jump on the band-wagon if that big break comes.

Kencot’s native star on the rise had much to say in a recent sit down with Mad A Road on industry support or the lack thereof. Actively pursuing a career in music for the past five years, Swashii believes that there is a lot of talent that exists in Jamaica. However, the lack of support and acceptance from both the government and industry people alike has held many a great young artiste back.

"The industry [presently] lack settings for upcoming artistes to establish themselves; yuh understand dem need fi build more things, so when a young artiste with talent forward him nuh have to guh through the whole world and pay the whole world to get a break and mek people hear him voice," Swashii said speaking on the current policies and creative infrastructure in Jamaica.

As a young artiste, he would much rather see the government show support for up and comers in the business through various initiatives teaching them to hone their talent as well as learning the business of the music. "If dem just set up a way, so dem accept young artistes, meaning give dem the full strength like weh dem give ah artiste weh hot already then nobody can hold dancehall down. Plus once we unite there will be strength in the dancehall genre on a whole," he said.

Swashii reiterates that most youngins in the industry have no formal knowledge of the concept of the business of music; thus they many times end up getting tricked or shafted by producers and persons who have been in the industry for a while.  "Them having more knowledge of the business than you as a young artiste just allow them to con yuh more" the artiste explained. He has looked at countries like Canada who established grant funding opportunities for a young artiste to release their first album, EP or musical project. "Dem tings deh me a talk bout, supporting the youths in the industry can only lead to greater things, not just fi di youths but for Jamaica” he exclaimed.

Like many, his start in music was influenced by older deejays and he names veterans such as Mr Lexx, Vybz Kartell, Bounty Killer, Sizzla Kalonji and I Wayne as mentors and inspiration. "As artiste dem man deh me look up to pon a different kinda level. Me get inna di music by the influence of older friends weh me deh roun' as a juvenile but some a dem pass off suh me a keep going for who nuh deh here." the young deejay expressed.

Determined to flood the airwaves, in 2019, Swashii was consistently releasing catchy tunes that were sure to have people tune in to his music as an up and comer in the game. His song '4/20', celebrating the power of marijuana, was aptly titled based on the date of April 20, which is dedicated internationally to smoking kush. Another one of his 2019 releases, 'Still A Wear' spoke to dancehall’s iconic fashion trends and is worth a good listen as it definitely has a vibe. Three other songs, released by the artiste shared more intimate layers of Swashii' Worry Bout', 'Story' and 'Never Bury' are also stands out tracks.

2020, saw the artiste realizing his big dreams, literally, with a track titled 'Big Dreams'. The artiste expressed "me always a pree big so is like from Rama Dan send me that rhythm [Dream Free Riddim] me guh suh rups and most of the things forward out to me in one go, that's how Big Dreams come to life still. It was a vibe me have from hearing di riddim". Speaking on the chorus of the track, he expressed "The punchline come naturally because a big dream we just a meditate." He outlined to Mad A Road that the chorus of the song speaks heavily to his ambitions as an artiste.

Swashii's authentic, old-school flavour of dancehall and versatility has continued to attract a wide audience. An ode to that fact is his recent feature on late 90's dancehall sensation Mr Lexx's 'Touch Down EP'. There is much more to look forward to from young Swashii Don as he is currently working on his mixtape titled ‘Problem’ among other things.

CHECK OUT HIS RECENT RELEASE: https://www.youtube.com/watch?v=OK-cuN0Renk