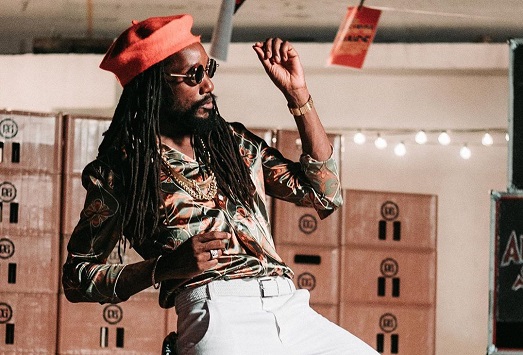 Kabaka Pyramid recently unleashed an updated version of Michigan & Smiley's mega dancehall hit, 'Nice Up the Dance.' The renowned lyricist incorporated both new and original lyrics to bring the track into a contemporary context. According to a release from the artiste's team at Bebble Rock, the song is supported by a visually rich and celebratory video shot in Jamaica and produced by Davida-Mae Chambers and directed by 300K.

The original version of 'Nice Up the Dance' was released in 1979 on the Real Rock Riddim and done by the iconic dancehall duo, Michigan & Smiley. Initially recorded by the top Studio One reggae band at the time, Sound Dimension, the Real Rock Riddim was the soundtrack for numerous classic dancehall/reggae tunes. From Willi Williams' 'Armagideon Time' to Dennis Brown's 'Stop The Fussing And Fighting' both released in 1977. However great those songs were, none was more suited for dancehall than Michigan & Smiley's 'Nice Up the Dance'. It became an anthem, the song everyone wanted to hear when they touch into a Kingston street dance.

In a recent interview with the Jamaica Gleaner, Kabaka expressed that getting involved with this project was a bit of a no-brainer for him. He said when Jeremy Harding linked him to do a cover for the song he loved the idea because 'Nice up the Dance' was a classic in early days of dancehall music. Jeremy Harding reproduced the Real Rock Riddim from scratch, and Kabaka sang a lot of the original song's and added two original verses of his own.

Vibe Magazine chatted a bit with the video's director 300K who let on that, "A lot of creative thought went into this project". The video was very fitting for the project; we may even say it achieved a level of perfection. It captured the fashions of the late 1970s right down to the tracksuits and diamond socks that Kabaka was wearing. "We were very intentional with the locations that were used, as well as the wardrobe for Kabaka Pyramid and the talent to assist. We wanted to ensure that the visuals matched the tone, the vibe and the lyrics of the single, and paid homage to its roots. The shots we took, down to the angles taken and even the movements of Kabaka Pyramid and the dancers were key to ensure the video was authentic, upbeat and made you feel happy, despite navigating the various things we are globally.", 300K explained to the popular magazine.

'Nice Up the Dance' is a pre-released track from the forthcoming, Jeremy Harding produced, 'Dancehall Anthems' Album for VP Records. The album is a collection of new recordings of classic reggae and dancehall songs that made waves across the genre at the time of their original release. The upcoming album will feature Dancehall Anthems reimagined by Kabaka Pyramid, Sean Paul, Beenie Man, Agent Sasco, Wayne Marshall, Runkus, Blvk H3ro, Bugle, and Royal Blu among others. The classic material was taken from hits produced by Yellowman, Michigan & Smiley, Ken Boothe, Tenor Saw, Papa San, Louie Culture and others. The single by Kabaka Pyramid is the second release from the Dancehall Anthems Project. The first being Beenie Man's remake of King Yellowman's single, 'Zungguzungguguzungguzeng', was not very well received. The Dancehall Anthems compilation album is slated to be released on October 9, 2020, and promises to be a classic one.