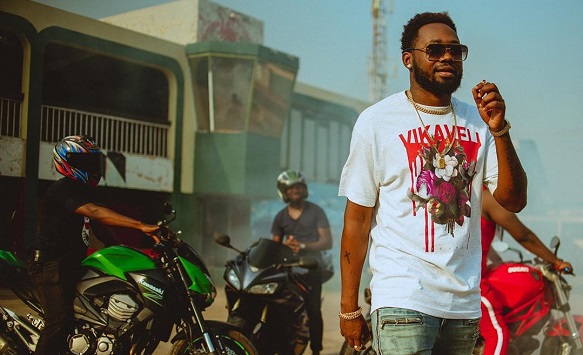 Dancehall artist Kranium is carrying the torch to bring more fire to the genre with his debut album, Midnight Sparks. Born in Montego Bay, Jamaica and raised in Jamaica, Queens, the star has a unique ear and varied experiences that make him a musical force. The Atlantic Records recording artist prides himself on his diverse ear, crediting Katy Perry, Justin Bieber, Drake, J. Cole and Rihanna for helping to shape the last decade of music. “I don’t have a favorite artist. I have favorite songs,” he said during an exclusive interview with REVOLT TV.

On Midnight Sparks, Kranium crafted a similar experience for his fans with features from Burna Boy, Ty Dolla $ign, singer PJ, rapper AJ Tracey, and fellow Jamaican artist Alkaline. Just like a masterful chef, he cooked up the perfect musical stew of Dancehall, Afrobeat and R&B.

REVOLT caught up with Kranium while in London on his European tour to get to know more about his moves. Check out the conversation below.

Congratulations on your debut album, Midnight Sparks! How do you feel about the reception so far?

I feel good. I’m happy with how it came out and I feel like people finally got a body of work from me that they truly love. I see a lot of people have different songs that are their favorite. You know how normally people will have like three songs and that’s it? I feel like this [album] has a variety of records that fans will actually love. Each song for a specific reason.

You have a Ty Dolla $ign feature. You have tracks with Burna Boy. What was it like working with those guys?

Me and Ty go way back. Me and Ty did like four records prior to this one (‘Hotel’). Burna Boy was my first time. So, when I did the record… I just knew. I’m that kind of person when I do a song. I just decide who would actually sound good on what record. So, I feel like I just listened to the record over and over when I recorded it, and I just know exactly who I wanted on the record, and that’s how that really came about. I just reach out like, ‘I have this record’ and they love it and it just works.

Your first mixtape dropped four years ago. Is it crazy to think about how far you’ve come?

Yeah, it’s crazy when I think about it for real. That I’m still a part of the thing and I’m doing good. I feel like back then was more of like my introduction of who I am musically. The Rumors project was more of an introduction. This one is more like, ‘OK. He’s a seasoned artists now.’ This is me and I’m still creative. I’m still putting out good records. I’m still making good music and I was more involved in the production side of it. Picking out the right records that I want— expressing myself after different experiences, and tour, my personal life, friends, you know what I mean? My surroundings and environment. I feel like that’s the difference between both. The first one was more of an introduction of who I am and now on this project, it’s more like OK, this is what I’ve been through and this is what I’ve been doing.

So, now you feel more comfortable in your own skin.

You have a diverse international background. You were born in Jamaica, raised in the U.S. You’ve lived all around the world. Tell me how those international experiences have shaped your music.

These things as an artist when you travel, I feel like it plays a lot and it should play a lot in your music because at the end of the day, we all are trying to touch each market musically. Music nowadays is like cooking soup. You know when you make soup you have to add different items. You add your black pepper or your likkle pumpkin or your banana or whatever you’re using in your soup. This is what it is. These songs are a piece of each sound or piece of each experience of each country or continent that you visited. You try to make it into one and that’s what differentiates you from a lot of different artists. It’s just all about using your environment, and using the travels and experiences to make good music.

In the last three years, there has been a huge rise in international sounds. We have Afrobeat in the forefront. Reggaeton is on fire. Where do you think Dancehall fits in the musical landscape for 2020?

Is there anything you want to leave us with?

For now, it’s just all about promoting the songs from the album like ‘Hotel’ and ‘In Charge.’ I have a lot features just coming out. It’s just more work. I’m the type of artist that doesn’t like to plan on things. I just do things according to my ability, and whatever I got or reap from it, I’m happy with it. You know I’ve been working hard, I been going hard and going to continue to go hard, you know, get the music out there, and just be a part of the conversation, and rep Dancehall music as much as possible.