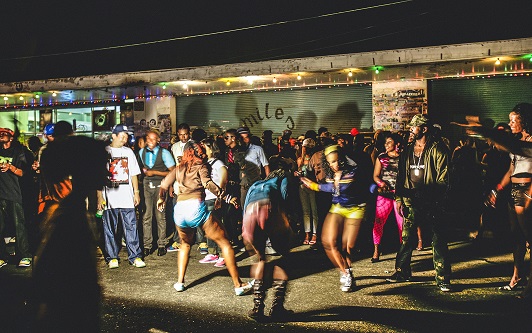 Noville 'Big Joe' Webster has come up with a simple way to improve his living conditions. At dances, Webster has been showing in the middle of the juggling by DJs, to solicit money. His goal is to complete a house that his late father left behind.

He told THE STAR: "A just the energy weh mi a push and me know if me dweet, people would a give me a good forward. As a likkle youth, mi a try fi elevate and live comfortable like everybody else and move good. Mi want can sleep comfortable and you nah go hear say me rob."

Webster, who hails from Golden Spring in St Andrew, says the idea came after he was given the microphone at a dance by Fuzzy, a sound system operator.

He said: "I asked and mi make $2,500. Then mi say alright, mi a go a big party and 'stick up' da party deh because I know a lot of foreigners deh deh, so I just go and ask. Dem say you must ask and you shall receive."

According to Webster he made $19,500 in less than two minutes.

"From there I buy some things for the house. I bought a big fan and post it on Facebook and tell di people dem this is what I made and thanks for helping Big Joe," he said.
His strategy

He said that he knows his strategy alone won't last, so he wants to invest any money he gets. He has even started hosting his own events.

"Each time me go a party and 'stick it up', I want to invest in something, buy a car, run taxi or something. I love the energy I get from people and the people dem love Big Joe all bout. Mi keep my party last year and the money weh leave after consignment, mi use buy board, nail, zinc, bed and the base," he said.

Webster says he dropped out of high school because other students "used to bully me, beat me up, so mi nuh go back. Mi just stop go school and go work."

But his attachment to parties saw him leaving work to attend dances.

He said: "Mi leave from work and go dance go lift sound box and string up sound, get a likkle change and invest in myself. The dance thing ina mi, from mi bout six year old. Fuzzy ever a push mi from dem time deh, him still a steer me and guide me. DJ Shawn too, afi big him up."

Webster has outlined what areas of the house he wants to work on next.

"Mi wouldn't mind get likkle help to fix up the window and step to enter the house. My mother live here with me. She need a step to go up her likkle room to and the bathroom to fix up. Every time mi get a likkle change me just spend it back on the house," Webster said.