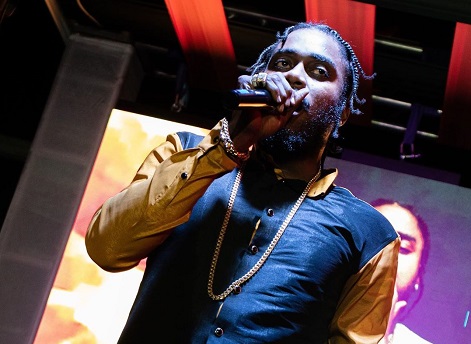 The producer with the golden touch has literally struck GOLD with his Kyng Midas album, which as I expected, entered the Billboard Reggae Album Chart this week! (Cues Applause) And what an impressive, ‘I’m late to this party but since I’m here lets drink some champagne and turn up’ entry it is. Funnily, he posted on his instagram page, champagne popping and champagne chilling in a dutch pot (only Jamaicans call it that), which is a very Jamaican thing to do.

Call me crazy or whatever but numbers are very significant to me, many other people the world over and hopefully Notnice. (#KeepYourJudgement) The Kyng Midas Album made its Billboard debut at, you guessed it NUMBER 9 on the Reggae Album Chart and according to numerology, the number 9 is said to be the number of universal love, eternity and faith. It speaks to wisdom, a significant connection to past lives, signifies completion and is represented by the colour GOLD. I mean, who knows, Notnice could be a reincarnation of the actual King Midas… lol! (No I’m not drunk)

How could I forget, incidentally, track 9 on the album ‘Crime Lord’ by JaFrass is my favourite track and the Album was officially released on August 9… I see you Notnice.

In my last article, I said I would publish the answers to my original questions to Notnice, from an interview which I conducted a couple of weeks before the release of the Album.

Notnice said, “Kyng Midas is the first [but definitely not the last] album from myself which features 20 exclusive tracks never before heard, no two artist on one riddim kinda thing, all exclusive tracks.” Additionally, we can expect, “greatness and a diverse body of work from Notnice Records. Not just what they [fans] have become accustomed to over the years, as I try to diversify the style of the way I produce and also the artist that are on the project most of them I’m working with for the first time.”

Why remake the classic New Found Love by Garnet Silk? “Well it was Popcaan’s idea to do the song and I welcomed it because I thought it was a good idea and it is a great song from a great legend in reggae music and Popcaan would be highlighted in a different light showing his versatility.”

Speak on what vibe can fans expect from the album, “Well i wouldn’t say I have a signature style, people say I do but I don’t hear it, but it’s nothing like what they are used to. As u can see and hear the first track [that was released, Popcaan’s New Found Love] is a reggae track and that in itself should show u that this is not an everyday project, I am trying to use this project to display my skills in doing just not the regular stuff that I am known for.”

I can definitely say, he was not lying with this one, every song is a bop and all have a different vibe, and his golden touch surely has turn music outside his regular scope into golden rain drops for our musical ear.

What are your expectations for the album, how well do you think it's going to do locally and internationally? “Well I know it will do well as long as it gets to the masses because I have 100% confidence in my work and I know that it’s of top quality, up there with anything else on the world market. Well I didn’t do this album geared towards the local market as we here in Jamaica don’t buy music unless is from the CD man dem in Half Way Tree, so I tried to give it [the album] a blend where there is a balance as to what can play in the parties also some stuff grandmas can listen to. Mi need this Grammy fi bring home fi show mi granny!”

I don’t have to say it, if you have listened you will know, this album is deserving of every single music award ever made (ok maybe not ever made… lol!) However, according to the Jamaica Observer, the album has only sold a paltry 64 copies, which is an indictment on us all as Jamaicans, locally and in the diaspora. If Jay Z drops an album tonight at midnight, it would have sold 64,000 copies by 6AM and many Jamaicans home and abroad would be bragging out the ass about buying it and touting how amazing the album is. Why don’t we give the same energy to our own? Like… Why?

Don’t get me wrong, I am a huge Jay Z fan; however I am also a fan of our Jamaican talent, even more so the ones that have potential to make it big internationally which most times is the aim. So, why not support them? Come on man, the album probably costs $9.99.

BIG UP Notnice & CONGRATS on charting this week!