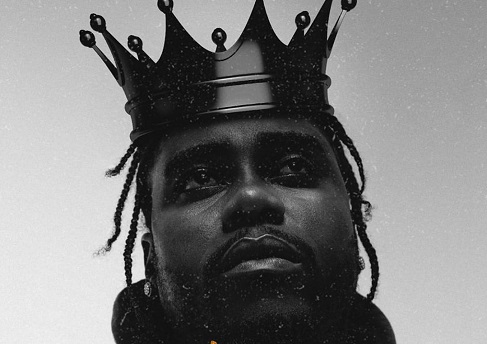 Random rum drinking, Hennessey, some more random drinking…. three events in the bag and Thursday, August 8, 2019, must have been an eventful day. Still yet, I don’t think I could have come home drunk and gone to bed without penning my thoughts on the newly crowned King Midas of Dancehall.

Hi, my name is Toni-Ann Kelly and even though we may not have been formally introduced, I write bomb articles for Mad A Road weekly. Rewind to a few weeks ago, I forwarded some questions to Not Nice about his upcoming album, he answered and not one day following did I have an urge to write the damn article (I’m sure I crucified myself at least 5 times over it). But, nothing before it’s time, everything in the universe is in perfect divine order… or at least, so they say.

A few days ago, flying into my WhatsApp came an invitation to attend the launch of One RPM (Music Distribution Company) and NotNice’s ‘King Midas’ Album, to say the very least, the goosebumps that filled my body were owed only to the excitement that  I felt and yes I screamed.

Back to present day (today or yesterday), I waltzed into what my thoughts had as another regular, degular industry event (I’ve been to many), says one time on the invite and begins three hours later, not many in attendance or attend on time as dancehall in Jamaica doesn’t ever get popping until 1:00AM, no clear programme schedule, lots of rambling and slurring from dancehall artistes who have been drunk off Hennessey for at least a week… you know… the usual.

Anyways, I was pleasantly surprised when I came into the event and emcee Jadeen ‘Jade Tha Jem’ McGhie had the audience very engaged and ready to listen to what has to be the biggest thing for dancehall in the last 10 years, even, maybe possibly outshining an incarcerated Buju Banton’s return home (Love Buju, but yes the album is that good). The audience was practically begging Jade and DJ Nicco to start playing the tracks for all to hear. All formalities were handled, protocols observed, background given, Jah Vinci made sure we knew he was present and we all waited with bated breath to listen to the most anticipated dancehall album of 2019. Ainsley Morris, better known by his alias Notnice, joined Jade on stage to introduce the tracks and give backstories on each track, which despite being a tad nervous to be on stage alone, he handled himself well.

In a very lacklustre event review, I want to just say go and buy, stream or download the album, every song is worth the listen, I even dare say that every single track is worth at least 4 pull-ups. Now I can talk about, what makes this album the ‘IT’ for me (not saying I am any great musical critic… or maybe I am… who knows?)

Being a lover of the literary arts, especially Greek mythology, the reference to one of the greatest tragedies of all time stole my heart. If you don’t know the story of King Midas, let me give you a synopsis. King Midas, a very vain and wealthy king was cursed with what was known as the ‘Golden Touch’, later renamed the ‘Midas Touch’, which turned everything he touched into literal GOLD. Doesn’t sound like a bad thing, right? Try eating and drinking water with this curse, or caressing your lover. Notnice, on the other hand, has had very positive outcomes with his golden touch, as so aptly outlined by the Outro of the album, which had snippets of most; if not all the hits he has produced over the years.

From the first tease of Popcaan’s remake of Garnet Silk’s New Found Love, everyone’s ears have been peeled, listening out for other new tracks produced by Notnice and ultimately the album. The suspense was definitely worth it, every new tease or track that was dropped was better than the first. Climaxing with Dexta Daps ‘Strangers’ and oh what a climax that was, #1 trending in Jamaica, a quarter of a million views in less than 24 hours… sheesh! Dear Dexta Daps fans peep the video here: https://www.youtube.com/watch?v=EsfnrliX8e4

On this album, you will witness something that most of us have put in the secret box in the back, back, back of our minds… Caution, for the real GAZA fans the Empire Medley may bring tears to your eyes (who’s cutting onions?). Track 8 aka The Empire Medley features Blak Ryno, Jah Vinci, Gaza Kim, Lisa Hyper, Dosa Medicine & Sheba… Just like the old days. #FreeWorlBoss.

As a part of the production process, Notnice held a competition via social media, allowing aspiring artistes to possibly get a spot on the album. Well, 2 spots on the album were taken by one male and one female entrant. According to Notnice, the female choice of his was not the winner of the competition by votes, however her talent was undeniable. Stream the album and look out for Nordia Mothersille’s ‘Sorry’ and Natural Flames ‘Often’. By all indications Nordia can be Jamaica’s equivalent to Adele, I guess that’s why she is the first female to be signed to Notnice Records.

Variety isn’t a much-celebrated word in dancehall. However, Notnice has managed to achieve the ultimate. The album gives you so many different flavours to choose from, it’s almost cruel. If you love Dexta, there are two songs (YES TWO). If you are into classic dancehall; take a listen to New Found Love by Popcaan and One General by Bounty Killa. If world music, afro beats and that overall international flair appeal to you, check out That’s Mine by Sean Paul, Promise by Tion Wayne and Sexy Lady Shattawale.

Oh, before I forget, for my ladies who are into that rugged, grimy, rude bwoy style, two words ‘CRIME LORD’… I thank you. (The video drops today and the song is by Jafrass)

Now I sit up in my bed at 7:25 AM, slightly sober (I’ve had much water and some food since getting home at 4:45 AM) to say this, NOTNICE IS THE KING MIDAS OF DANCEHALL and we should all crown him, everything he touches is gold. Gage (who is also on the album) aptly said it at the launch ‘He is a genius’ to cheers from the audience that this album deserves a Grammy… I do agree.

P.S. I will publish the answers to my original questions in a few days. 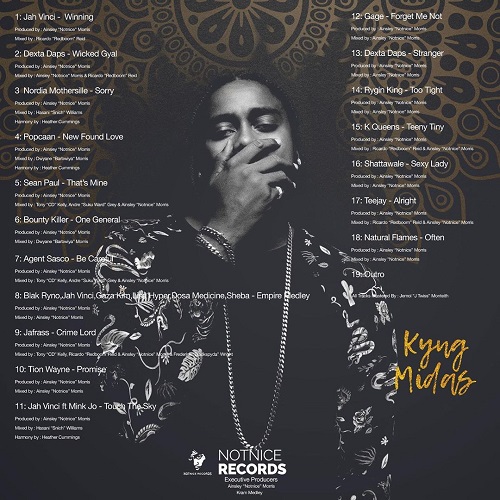