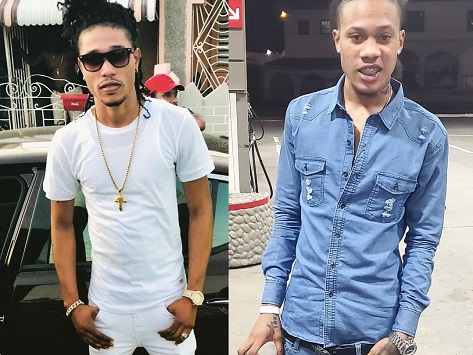 Sikka Rymes has sounded a warning to fellow artiste Intence on his new track. The song titled Dem Nuh Bad is aimed at the Go Hard deejay who Rymes believes passed his place in responding to a post made by the account of incarcerated deejay Vybz Kartel.

"I don't know how it start, but him seh something bout mi daddy, and mi jump inna the war. Kartel questioned if some artistes were buying views on YouTube, and some man tek it up on dem head and style di Teacha bout some man mus guh a dem bed. So if a man nuh call him (Intence) name, him muss guilty if him tek it up pan him head. Kartel can't answer, so I have to answer," Sikka Rhymes told THE STAR.

Making no qualms about his 'war intentions', the deejay says he is prepared to engage in a lyrical showdown should Intence answer his song. In fact, he says the climate in music is perfect for clashes.
WAR SONGS

"People don't have nothing a do right now, so they have all time and ears to listen to war songs. Man born for this, so it nah tek wi no time fi rub him out. Back in the days with my group called Elite Squad, I used to do clashes every day, so this is nothing new to me," he said.

"Clash a part a dancehall, and people don't have to worry about this getting violent cause we both lock up inna wi house a do music and quarantine."

But while Sikka Rhymes is prepared to go to war, it seems like a clash is not on Intence's radar. When THE STAR contacted Intence's manager, Boysie, to request an interview, he said the artiste's focus is elsewhere.

"Right now we just a focus on building our thing. We hear it (Sikka Rhymes diss track), but we nah respond. We and dem nah have nothing," he said.

Meanwhile, response or no response, Rhymes intends to shoot a music video for the Intence diss track. Highlighting that the show must go on, the artiste says he will be followig the Government's dictate, which limits public gatherings to no more than 10 persons. He also says Lysol and hand sanitisers will be on set during filming as he understands that personal hygiene is a high priority at this time.