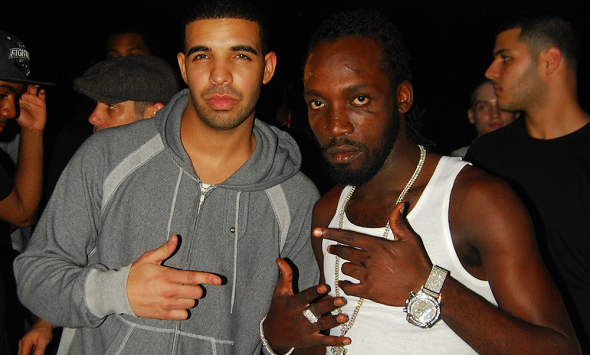 We woke up this morning to the Gully God, Movado’s ‘Enemy Line’ trending #5 on Youtube, oh boy who woke up the Warlord’s last son? To tell the truth, I was actually sleeping on this beef after hearing Drake’s ‘Only You Freestyle’. My thoughts were Drake is not trying to start a war with a dancehall artiste, worst of all the last of the clash kings Mavado.

On July 20, Canadian hip-hop artiste and worldwide sensation Drake released a collab with British grime rapper Headie One called ‘Only You Freestyle’. The video has received over 9.6 million views since being released 10 days ago and features some of the grimiest, Jamaican-ess looking men, posing as Drake’s crew.

On the track, Drake is seemingly rapping in Patwa even though it more sounds like he is rapping in a grime style. He gives nods to Popcaan and the exiled pharaoh Vybz Kartel and seemingly taking shots at Mavado in the same verse. The verse in question goes like this:

“Link Popskull in Gaza but not that Gaza but still it’s a Mazza.

Boy 4 in the clips and one in the Headie.

Hand no shake man I hold that steady.

Your man love pose wid the ting for the picture.

Yeah, can’t backchat to the Prezzi.”

Little known fact, Drake and Mavado used to be good, they were slated to build a library/learning centre for unattached youths as a joint-venture in Jamaica; however, Mavado failed to deliver on his end of the deal. A 2010 MTV article stated, “American rapper Drake has reportedly donated US$25,000 towards building a learning centre in Jamaica with dancehall artist, Mavado.” The project was started by Mavado with his manager Julian Jones-Griffith, the building would have been called the Drake and Mavado Peace Centre. Well, shame on Mavado & Julian because the youths of Cassava Piece are still waiting for the building of the centre (it has not yet begun to be built much more to be complete).

Yesterday (July 29), Mavado posted a clip of his newly released single ‘Enemy Line’ on his Instagram with the caption, “Suh yuh wa be like wi, and try style the thing. Remember this Dancehall a mi play-ground, Dancehall is my job. I’ve been a superstar over 15yrs and created countless hit songs in my genre while developing my unique singjay style of which the new generation is all about today solidifying the craft. You are not from Dancehall, You have no Power in Dancehall n everybody know who introduce you to Dancehall so don’t feel like you can come disrespect Gully take that out you brain n don’t dweet again.” Then Movado followed the post up with the release of the full single on his Youtube channel. (https://www.instagram.com/p/CDQDDz6JQH8/)

Suh yuh wa be like wi, and try style the thing. Remember this Dancehall a mi play ground, Dancehall is my job. I’ve been a superstar over 15yrs and created countless hit songs in my genre while developing my unique singjay style of which The new generation is all about today solidifying the craft 👊🏽🔥. You are not from Dancehall You have no Power in Dancehall n everybody know who introduce you to Dancehall so don’t feel like you can come disrespect Gully take that out you brain n don’t dweet again. 🇯🇲

‘Enemy Line’ is a hard-hitting, bars after sweet war-ready clash heavy bars, diss track aimed at international superstar Drake. In the new track, Mavado out-rightly calls Drake a culture vulture “Tell soft and fake likkle sheep, like Mormon, die trying but you will never be a yard man.” This however cannot be the reason for their estranged friendship, but the lines below sure can. Movado also said in the song “Instead of carry feelings fi gyal weh gimmi foul play, mi tek a fuck and den mi cut it neva worth stay. Fuck who turn enemy a suh di ting stay”. Did Mavado get entangled with one of Drake’s girls? Well, rumour has it that, years ago when drake came to Jamaica (whilst the 2 were still friends) Mavado tek a piece off a drake gyal inna di cyar back. Ok fine, it wasn’t in the back of any car, but Mavado did take a piece, which he refers to as a one fuck.

This deejay/rap, Movado vs Drake clash is fixing up to be something epic, I can’t lie. The flows on both tracks are top-notch, however, Mavado brought me back to that authentic Sting clash vibe and I am here for it. I am an original GAZA girl, but for this one, I’m putting my money on the Gully God. Drake better not back down because he started this. Poor Popcaan, stuck in the middle of this mess lol! Check out the videos below and tell us what you think.

Headie One x Drake - Only You Freestyle: https://www.youtube.com/watch?v=znQriFAMBRs